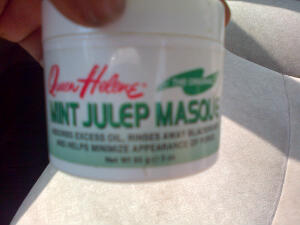 I first saw this mask on cult of pretty a blog dedicated to cult beauty brands and innovative products.

It was amongst the things listed as drugstore brands which were all that.
So I kept a lookout for it.
I bought this from casabella at the palms lekki.
Anyone who loves hair products ,makeup and some skincare will know casabella.
I always have a casabella haul whenever I go to lagos or recently abuja.

This mask has been touted * not in wrong terms* as a magical product that removes the gunk from skin and reduces oil, breakouts, treats blackheads.
So I bought it.

Packed good with anti-acne zinc and sulphur .
Clay for cleansing.

I used it about 1x weekly for a period of time..
I only noticed it made my oily skin very dry.

It’s a dry product on it’s own so it didn’t give a glow.
Pores were less visible.
And it made a nice base to use a softening mask afterwards.
I used an elemis mask afterwards

The combined effect was nice.
However I didn’t see myself reaching out to use it ever so often.
I didn’t like the smell it’s sort of medicinal in looks and texture and I didn’t feel pampered using it.
I guess at the price I wasn’t expecting some luxury product.
It felt better putting it on skin with some water.
Like wash and then pat a little of the water off.

After staying on my shelf for about a year plus and I am finally saying goodbye to it.
It does everything it’s supposed to in my opinion except rinse away blackheads which was the main reason for which I bought it.
I’ve seen tube versions of this product everywhere and funny enough, I’m curious as to the formulation,maybe an improvement or some little difference.
You bet I’ll try it soon enough.

For someone who has oily oily oily skin which I don’t have, I guess this would be heaven sent.
One must note though that oily doesn’t mean be harsh.
I think it’s a bit too harsh.
However it is worth a try.
It has zinc and it has sulphur.
Using a moisturiser afterwards can be a nice way to combat the overdrying effect I experienced.
Because this product did 2/3 of what it claims, I score it a nice 4.0/5

looking for something? check here

the conversation so far